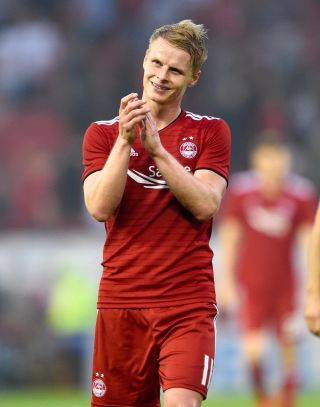 Derek McInnes says Gary Mackay-Steven has not slammed the door shut on the possibility of staying at Aberdeen.

The former Dundee United and Celtic winger’s Dons contract is now up and he is free to move on.

Portsmouth were rumoured to be close to signing the 28-year-old last week while New York City took an interest in recent months before pulling out.

But McInnes revealed Mackay-Steven still has not ruled out the possibility of appearing in a Dons jersey again.

He said: “We have been speaking to Gary throughout the summer. If Gary turns around and says he really wants to be here when he weighs up all his options, then we will see how things develop.

“I have enjoyed working with Gary and I want to continue working with him. He is at an age where he wants to consider his options.

“As recently as yesterday he was telling me (he) is definitely considering staying – but I need him to want to stay.”

One man who will be slotting into McInnes’ line-up this season is Craig Bryson.

The former Kilmarnock midfielder is returning to Scotland after eight years at Derby and the Dons boss revealed he beat off competition from the Sky Bet Championship to land the 32-year-old.

“When you look at the out of contract list, there are not many better than Craig, if at all,” he said. “We are absolutely delighted we have managed to secure that signature.

“It has all come about pretty quickly. Although I have been speaking to Craig’s agent since January/February, on and off – he let us know that he was willing to come back to Scotland.

“He had a stronger offer to stay at Derby, he had a strong offer from elsewhere in the Championship, which indicates the level of player that we are getting.

“Thankfully it was not about money, it was more about coming back to Scotland. We kept the line of communication open. Craig had a lot to consider and it all moved pretty quickly.

“He is a top, top player. Craig has had a great career but from speaking to him, he has so much more he wants to do and he wants to do it in an Aberdeen shirt.”

McInnes has also signed Ash Taylor, Ryan Hedges and Curtis Main so far this summer and wants more in.

He said: “We are still keen to try and add to the squad. We need to stress that we are working really hard to bring players in who won’t cost money.

“And that is difficult. So we are actively trying to secure one or two other positions at the moment. Hopefully we will have a couple more done before we have to register the squad for Europe.

“The obvious position we are looking at is left-back. But we are also looking at two or three different positions.

“We are making good progress with a few things. We will just need to see how it plays out for us.”