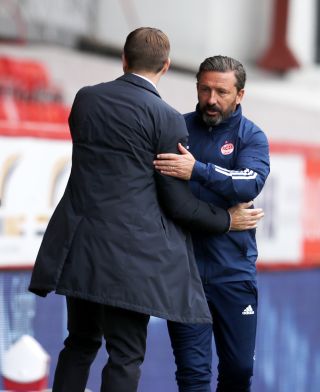 “Deeply sorry” Aberdeen manager Derek McInnes thought his players knew better than to go out in the city after a defeat by Rangers – never mind during a global pandemic.

McInnes confirmed the eight players who went to a pub on Saturday night would be disciplined and apologised to the rest of Scottish football for putting the season at risk after one game.

Aberdeen’s Scottish Premiership match against St Johnstone has been postponed at the request of the Scottish Government after two Dons players tested positive for Covid-19 and a further six were ordered to self-isolate.

First Minister Nicola Sturgeon declared herself “pretty furious” with the actions of the eight players and McInnes shared her response.

After a 1-0 defeat by Rangers, the players initially went out for dinner – breaking general guidelines on the limits for four households to meet – and then on to another bar, breaking more guidelines.

“We would always encourage players to go out socially for meals but always at the right time and just now is certainly not the right time,” McInnes said.

“Under the current restrictions, players have got to have added responsibility and make better decisions than going out in a group.

“The added matter for myself, having been at Aberdeen long enough, the players are very well aware that you don’t go over the door if you lose a game against Rangers. That for me has added a lot of anger and disappointment.

“Where my anger and disappointment comes from is that they then proceeded to go into another pub outwith the restaurant and that for me is where the whole thing changes.”

When asked if he had warned the players about going out, McInnes said: “We were training the next day so you would assume there would be a level of restraint there.”

The former St Johnstone manager added: “We have made them well aware of the responsibilities.

“I have spoken often enough about how grateful we were for the opportunity to get back playing football. Our club have done everything to the letter and jumped through all the hoops. Our club could not have done anymore to protect our bubble. We are confident our players cannot be infected at work. But we only have them certain hours a day.

“The players, it’s been clear to them, they have to continue as if they are in  lockdown. It’s generally common sense – don’t put yourself in crowded areas, where you are going out in groups of people. The protocols are pretty clear.”

McInnes added: “The players are full of regret, they have made a real bad error of judgement.

“We are so remorseful that this has had an impact on Scottish football. A few weeks ago we were absolutely delighted we had the opportunity to get back playing football. The fact we have jeopardised that by the players’ actions is extremely disappointing.

“Players will be dealt with internally for a breach of discipline.

“I understand totally the anger and the sentiment being aimed towards us and for that we are deeply sorry.”

Aberdeen must now wait to see whether they will be allowed to host Hamilton next Wednesday and then travel to Celtic Park three days later. They will be without the eight unnamed players for both matches if so.

“I’m hopeful we can get back playing football and focus on the games,” McInnes said. “It’s certainly going to be a challenge in terms of team selection. There will be a lot of key players missing.

“I think it will be important to see how the wider region is, and also the results of further testing. Like every club there is always a nervousness about testing and that’s added with the situation in the city and within the club.”