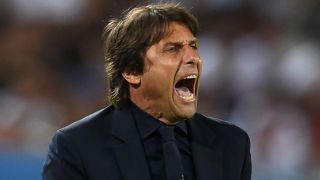 Antonio Conte will make numerous changes to Chelsea's squad as he looks to make his mark on the Premier League, according to Marcel Desailly.

Last season, Chelsea mounted a disastrous defence of the title they won in 2014-15, Jose Mourinho getting the sack in December before interim boss Guus Hiddink led them to a 10th-placed finish.

It was announced that Conte would take over at Stamford Bridge after guiding Italy through their Euro 2016 campaign, which came to an end with a penalty-shootout defeat to Germany in the quarter-finals.

And Desailly, who spent six years at Chelsea, winning the FA Cup in 2000, believes Conte will oversee an overhaul of the playing squad as the club look to put a poor 2015-16 behind them.

"All the time I think he is the right man before the start of the season!" Desailly told Omnisport.

"But he will be the right man if he is able to build up a team that matches with his own philosophy, meaning the kind of player he needs to develop his own tactics.

"So it looks like there's a lot of movement coming into Chelsea, they need to remove four or five players in and out to allow Conte to perform."