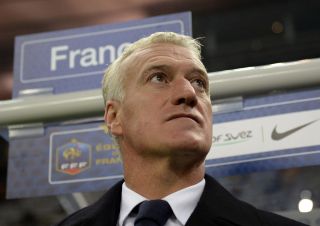 Deschamps was speaking following his team's 3-0 home win over Finland on Tuesday, a result that did not prove enough to see them qualify automatically as Spain sealed top spot in Group I thanks to a 2-0 victory over Georgia.

Franck Ribery opened the scoring in the eighth minute, before a Joona Toivio own goal on 76 minutes and a Karim Benzema strike three minutes from time sealed a comfortable win for the 1998 World Cup winners.

France will now enter Monday's draw for next month's play-offs as an unseeded team and will play either Portugal, Croatia, Greece or Sweden over two legs for a place in the finals in Brazil next year.

Deschamps does not mind who France will be pitted against.

"I have no preference," he said.

"We will take what we are given, but it is true that to play Portugal with (Cristiano) Ronaldo is different."

Of the game itself, Deschamps was pleased with the way his side's display.

"We had the ambition of being first (in the group)," he said.

"But it is good that we can also play this type of match and score three goals, especially compared to what awaits us in November."

Ribery, however, was clear about the teams he would like to avoid in the play-offs.

"Portugal and Croatia should be avoided," he said.

"There will be no easy games. We will play both games thoroughly and do everything to go to Brazil. It will be quite a World Cup."

Benzema, meanwhile, was full of praise for team-mate Ribery before underlining the importance of the result.

"I applaud his work," he said.

"Again, it's nice to score, but this is the victory that counts.

"It was a very good game and we must continue like this."