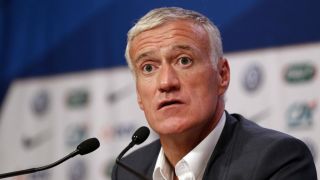 The tournament minnows will look to spring their biggest upset to date when they take on the hosts at Stade de France on Sunday.

The major finals debutants triumphed 2-1 at the same venue against Austria to seal second place in Group F and went on to stun England in the round of 16.

Iceland's first goal in both matches came when Kari Arnason flicked on an Aron Gunnarsson long-throw, with Jon Dadi Bodvarsson and Ragnar Sigurdsson the respective beneficiaries.

But the side coached so impressively by the veteran Lars Lagerback and Heimir Hallgrimsson sunk Austria with a lightning breakaway featuring substitutes Theodor Elmar Bjarnason and Arnor Ingvi Traustason, and unpicked England with some precise passing before Kolbeinn Sigthorsson netted decisively.

Asked whether there was any chance of complacency in the French camp, Deschamps told a pre-match news conference in Saint-Denis: "We didn't have to guard against that because the players watch the matches.

"They are well aware that Iceland are not here by chance. They qualified to get here and beat England in the last-16. They have not stolen anything from anyone. They are here because they deserve it.

"They have long throws and a thrower who can throw them very flat. We have taken measures to try and counteract this element of their play, but Iceland are not just about long throws.

"They are able to move the ball swiftly on the deck and they have quality players."

He added: "The players in this side playing [in] the Premier League, they are not small-time players. They deserved to beat England.

"There are players like [Aron] Gunnarsson, [Birkir] Bjarnason and Gylfi Sigurdsson who are technically very gifted. They have some smaller guys. It is not just physical power."

Deschamps confirmed France had not formally practiced penalties before the match, after right-back Bacary Sagna told reporters of a relaxed approach to potential shootouts during the later stages of the tournament.

"No, I don't have penalty practice and I've never done so for a very simple reason," Deschamps said.

"What I've experienced as a coach is that talking penalties in training in a relaxed fashion has no comparison to after 120 minutes in a full stadium.

"I have players in the squad who are used to taking penalties for their club sides, so there are no concerns there.

"Some stay after training to take some but I am not going to do a specific session."

France will train at their Clairefontaine base later as opposed to the Stade de France in an attempt to preserve the playing surface.

Pitch quality was a bugbear for Deschamps earlier in the competition but he is satisfied by the improvements made at the national stadium.

"I've gone out and had a look at the pitch and it is a lot better than at the start of the tournament," he said.