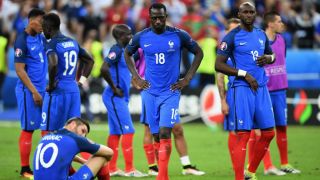 France coach Didier Deschamps denied pressure got to his team in their 1-0 loss to Portugal in the Euro 2016 final.

The host nation were favourites to win the decider in Paris on Sunday, but went down to a stunning long-range goal from Eder in extra time.

Deschamps' men had their chances as Andre-Pierre Gignac struck the post and Antoine Griezmann was unable to convert a second-half opportunity.

While Deschamps was unwilling to make excuses for his team, he believes expectations had no impact.

"I don't think there was any extra pressure. We didn't play with the brakes on," he told a news conference.

"But Portugal are good at stopping the opposition from playing, they defend as a unit and get forward when they can.

"Of course we used a lot of energy against Germany, but if I say that it looks like I'm seeking excuses. There's a big difference between three or four days to recover.

"We put a lot of energy into the Germany match, but we could have had a bit more freshness. That, in turn, would have helped us be more clinical."

Deschamps rued the chances missed by his team, with Gignac going close to finding the winner when he put a shot against the post late in the second half.

"Of course the overriding emotion is of huge disappointment. It's cruel to lose a final like that. You have to accept it and I congratulate Portugal, the newly crowned champions," he said.

"We had our chances, and Andre-Pierre Gignac in stoppage time, but we weren't clinical enough, cool headed enough.

"Perhaps we also lacked a bit of freshness. But my players gave me everything tonight. It came down to very fine margins. We lacked what is essential."

Griezmann won the Golden Boot after scoring six goals, but the Atletico Madrid star put a header over the bar in the second half.

Deschamps was still full of praise for the 25-year-old, saying: "He had chances.

"He came up against a goalkeeper who made some crucial saves. It wasn't easy for him, having lost the Champions League final, but he's still a young player coming to the top level of European and club football. He was crucial.

"Maybe he wasn't ultimately clinical enough tonight, but he is a top-level performer."