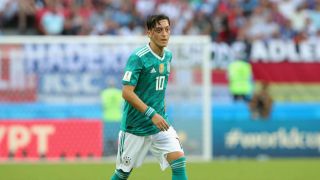 The German Football Federation (DFB) has denied Mesut Ozil's allegations of racism and insisted he should have explained his actions following his meeting with controversial Turkey president Recep Tayyip Erdogan.

Ozil launched an astonishing attack on the DFB and its president Reinhard Grindel on Sunday, accusing them of "racism" as he announced his retirement from international football.

The 29-year-old, who has Turkish roots, came in for significant criticism before the World Cup when pictured with Erdogan alongside Manchester City's Ilkay Gundogan.

Ozil was widely jeered in pre-World Cup friendlies by Germany fans, while DFB officials publicly criticised him for the meeting, leaving the midfielder feeling as though he had not been protected by his own country's federation.

The DFB responded on Monday and admits it played a role in questions being raised of Ozil's actions, but maintains he should have followed the lead of Gundogan and explained himself.

"The pictures with the Turkish president Erdogan raised questions in the German society," the statement read. "We admit that the DFB has a share in this.

"And we regret that Mesut Ozil had the feeling that he wasn't protected enough against racist slogans – like Jerome Boateng once was.

"But it was important that Mesut Ozil gave answers to the topic, like Ilkay Gundogan did, regardless of the result at the World Cup in Russia. At the DFB, we win and lose together, everyone as a team.

"The DFB would have been happy if Mesut Ozil remained a part of the team. He decided to not do so.

"We respect that and it is a sign of respect that we leave some of the statements that we do not agree with in terms of content and tone uncommented in public.

"We emphatically reject the DFB being linked to racism. The DFB has been very involved in integration work in Germany for many years.

"The DFB regrets the departure of Mesut Ozil from the national team. However, this does not change the determination of the association to continue the successful integration work consistently and with deep conviction."