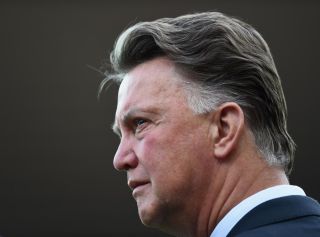 The Argentine winger arrived at the club from Real Madrid on Tuesday for a British record transfer fee of £59.7 million.

That news was tempered just hours later as United were humiliated 4-0 in the League Cup second round by League One MK Dons.

On the back of one point from the opening two Premier League games of 2014-15 against Swansea City and Sunderland, the size of the task ahead of Van Gaal has become abundantly clear, but the Dutchman insists Di Maria will not instantly solve all of the team's issues.

"He can accelerate the game but he can also play in the interests of the team and that's why we have chosen this player," Van Gaal said at Di Maria's unveiling on Thursday.

"I hope he shall give us good results but we cannot expect after two days' training sessions that he is the miracle.

"You have to work for the miracle and he knows that.

"I only buy players that can improve our philosophy. He fits in our philosophy and what he can do more than that, I can change the system with him and maybe we shall do that in the future.

"He played as a wide player [at Real] but also in midfield so we are confident that he will succeed."

Di Maria himself, meanwhile, hopes he can help return the club to its former glories after a difficult last 12 months at Old Trafford since Alex Ferguson stepped aside.

"I'm very pleased to play for Manchester United," he said.

"Manchester United have already won many trophies and are a very big team and I come in order to help the team raise their game and become an important team once again."