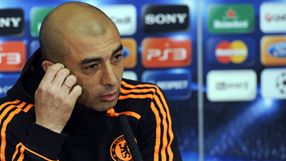 Di Matteo, speaking at a pre-match news conference, was boosted by the news that Didier Drogba, David Luiz and Raul Meireles, who were all doubtful for the game, trained on Tuesday and look set to be fit for the match at Stamford Bridge.

Chelsea are favourites to reach the semi-finals for the sixth time in nine seasons, but Di Matteo said they could take nothing for granted against a side that has scored in all of their away matches in the competition this season.

"The players are aware of this, and we'll have to go into this game with the right attitude, the same attitude as against Napoli.

"Nothing has been done yet. We're aware of that. We need to go and qualify for the next round."

Chelsea overcame a 3-1 first leg defeat in Naples in the last 16 to beat the Italians 4-1 at home on March 14 and unless Benfica show a huge improvement to the way they played in Lisbon, they look to have little chance of winning the tie.

Benfica, though, held Manchester United to two draws in the group stage, and cannot be totally dismissed, as Di Matteo emphasised.

"They have scored in every away game of their Champions League season, so it's a difficult task tomorrow night."

Di Matteo has been in charge of Chelsea for four weeks since the departure of Portuguese coach Andre Villas-Boas, during which time they have won six of their eight games, but he was not prepared to talk about his own future on Tuesday.

"It's a fantastic club, I'll agree with you on that," he said. "I need to win games, it's as simple as that. It's a results business and that's all that matters."