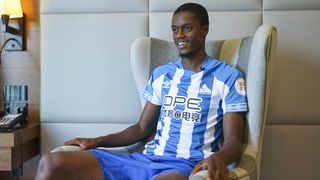 Diakhaby only joined Monaco last year after emerging at Rennes, but he found it difficult to hold down a place in Leonardo Jardim's starting XI.

Diakhaby brings with him pace and versatility, comfortable on either flank and even behind a main striker.

He has signed a three-year deal and his arrival is expected to see Thomas Ince depart for Stoke City in a deal which is said to be worth £10m to the Terriers.