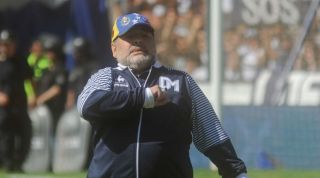 The 59-year-old confirmed his decision to step down as boss of the Superliga Argentina side on Tuesday.

But he is now back in the hotseat after announcing on Instagram that he is returning to the club.

Maradona said that "we finally achieved political unity in the club", adding: "I hope [the leaders] will provide reinforcements they promised me".

Gimnasia are currently embroiled in a relegation dogfight and sit in 22nd place in the 24-team top flight table.

Fans were desperate for the Argentinian legend to stay on and had planned a march to try and convince him.

It was to take place at Maradona’s home near Buenos Aires and eight minibuses had been reserved to carry fans to the location to make their feelings heard.

Additionally, the hashtag #DiegoVaAVolver (Diego is going to return) went viral in Argentina and fans chanted his name outside the club’s stadium on Thursday.

The march was eventually cancelled, as Maradona had already changed his mind about leaving.

Gimnasia haven’t spoken out on the matter yet, but Maradona is still listed as their head coach on the club website.

He joined the club in September, and has led them to three wins in their last five games after a tricky start.

QUIZ! Can you name the 40 most successful Premier League managers by win percentage?

ANALYSIS Why Trent Alexander-Arnold means so much to Liverpool fans