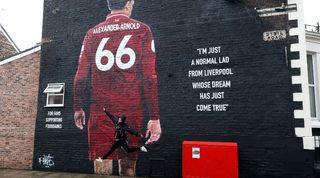 "Speed, aggression, strength... he had it all.” That was the praise from Liverpool’s then-under-23s coach Michael Beale after watching his side beat Sunderland 3-0 in September 2016.

The “he” Beale was referring to was a 17-year-old Trent Alexander-Arnold, who had just run the game from right-back and grabbed a superb solo goal to cap a performance that really caught the eye of the hundred or so watching at Prenton Park.

Pre-match, Beale had been a little concerned Alexander-Arnold might have a tough time up against Sunderland’s George Honeyman, who had already made his debut for the Black Cats’ first-team. Alexander-Arnold, meanwhile, had only recently made the transition from centre-midfield to right-back.

Beale needn’t have worried, though, as the West Derby-born youngster did what few others can do and ran the show from full-back. It was a sign of things to come.

At the time, Nathaniel Clyne was Liverpool’s right-back, but Beale and Liverpool’s academy staff had spotted an opportunity for Alexander-Arnold to challenge for the position. He was fast-tracked to Melwood to train alongside the first-team.

It didn’t take much time. A month later, the Scouser was lining up at right-back for Liverpool against Tottenham at Anfield in the League Cup, then picked up the man of the match award in the same competition against Leeds United in November. His Premier League debut then arrived - at Old Trafford of all places - in January 2017.

Since then, he’s never looked back. Long-term injury to Clyne opened the door the following season, and less than three years after that league debut, Alexander-Arnold has already clocked up his 100th appearance for his boyhood club.

He’s won the Champions League, entered the Guinness Book of Records after setting a new record for most assists by a defender in a Premier League season, and become the youngest ever player to appear in consecutive Champions League finals.

He’s also made his debut for England, scored for the national team, and had a three-storey-high mural painted on the wall of a house next to Anfield in his recognition.

The ability to be a playmaker from full-back is fairly uncommon in football. Former Liverpool defender Jamie Carragher says he doesn’t think he’s seen a full-back like Alexander-Arnold before, and it’s difficult to argue.

“You’ve got great full-backs like Cafu and Roberto Carlos - overlapping and putting a great cross in, but he’s (Trent) Liverpool’s playmaker,” Carragher said earlier this month.

“Liverpool’s setup isn’t that conventional, with midfielders hard-working, running and covering people – Trent is like a midfield player.

“It’s like putting Steven Gerrard there. That’s how I imagine he’d have played at full-back.”

As Carragher recognises, Alexander-Arnold has more than just ability, but also the desire and determination to make it at the very top level - a trademark of Gerrard’s game.

“I always used to pretend to be Stevie G when I was playing as a kid as he is a Scouser," said Alexander-Arnold back in 2017. "Everyone looks up to him.”

Now, it’s Alexander-Arnold who people look up to, with supporters having coined the ‘Scouser in our team’ chant in recognition of the 21-year-old.

The right-back’s upbringing and family add to his uniqueness. He’s a humble player who, as a kid, used to peer through the gates at Liverpool’s Melwood training ground literally just around the corner from his home.

On the final day of the 2018 season, it was teenage Alexander-Arnold who took the opportunity to take a local disabled boy on the pitch as the players lapped up the adulation of the Anfield crowd. It’s just one of many charitable acts of a player who has been working with the charity ‘An Hour For Others’ in Liverpool since before he made his breakthrough into the first-team.

“Trent is a godsend, because not only is he a top-class footballer, but he cares about local issues,” explained Liverpool’s head of club and supporter liaison, Tony Barrett. “He’s made friends with a kid who’s seriously ill in hospital and goes to visit him.”

It’s on the pitch though where Alexander-Arnold draws the most praise. Whether it’s for his assists - 16 of them in 40 appearances last season - or his sweeping, perfectly-weighted cross-field passes to fellow full-back Andy Robertson.

In the recent win over Manchester City at Anfield, it was his clever left-foot pass to Robertson that unlocked City’s defence for the second goal of the game. A keen chess player, Alexander-Arnold has the vision of an elite midfielder. He’s the queen in Liverpool’s tactical plan, playing line-breaking passes vertically, horizontally or diagonally.

Recently, he’s been compared to Gerrard, Kevin de Bruyne and David Beckham; comparisons that are made due to his crossing ability from the right side. But it’s not just his crossing that stands him out; he has vision, technique and tactical understanding that are rarely seen in a player at such a young age.

This season, he is averaging 3.5 key passes per game - more than any Premier League player averaged last season - and the second-highest for any player in Europe’s top five leagues, behind only De Bruyne (3.9).

His influence is also shown by his average passes per game (66), which is higher than any of Liverpool’s midfielders. So when Carragher says Trent is more like a midfielder for Liverpool, he really is.

He is the player who the rest of the back four and the midfield go to for a defence-splitting pass. He’s the player with the vision to unlock a defence or play a perfectly weighted ball in behind for Mohamed Salah to stretch the opposition defence and advance the Liverpool attack into the final third.

All this, of course, leads to the question over Alexander-Arnold’s long-term position and whether he will eventually switch back to centre-midfield, where he played his youth career. For now, though, he will play wherever the manager asks him, and Liverpool supporters should savour it.

GUIDE: Premier League live stream best VPN: how to watch every game from anywhere in the world