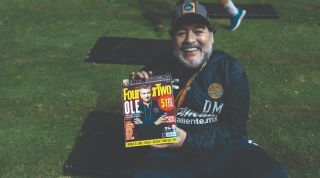 Legendary footballer Diego Maradona is currently managing lowly Dorados in the Mexican second division – but has told FourFourTwo he could return Manchester United to their former glory.

In an exclusive interview, he also reveals his verdict on the current Reds side.

The former Argentina coach has managed two teams in the United Arab Emirates in recent years, before taking up his current role with Dorados last year.

For the July 2019 issue of the magazine, FourFourTwo sent Editor at Large Andy Mitten deep into Mexican cartel country to track him down.

And speaking to FFT, Maradona revealed the heights of his managerial ambitions: “If Manchester [United] need a coach, I’m the man to do it,” he said.

“I know they sell lots of shirts around the world, but they need to win trophies, too. I can do that for them.”

He also said that he has long held warm feelings towards the Reds.

“Manchester United used to be my favourite English team for so long. So many great players and a great team under Alex Ferguson. But now I have to say Man City. I know you shouldn’t change like that but it’s because of Kun [Aguero]. We speak a lot and he plays in a very good team.”

And he revealed he already has some firm views on United’s team – while praising the atmosphere created by fans.

Read the full interview with Diego Maradona in the July 2019 issue of FourFourTwo, which you can order online here. This issue also includes exclusive interviews with the England Women’s team ahead of the World Cup in France, a history of madness at the Copa America, and an in-depth profile of ex-Barcelona and Spain hero, Carles Puyol.