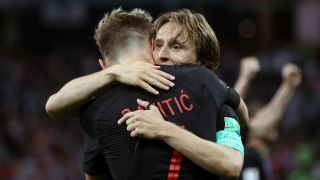 Eric Dier heaped praise on Croatia duo Ivan Rakitic and Luka Modric, warning that England must contain them if they are to book a first World Cup final spot in 52 years.

The Croatian midfielders have been in imperious form throughout the tournament and will pose a significant threat to the Three Lions during their semi-final clash on Wednesday.

Both scored in Croatia's devastating 3-0 group-stage win over Argentina, while Modric also netted a penalty in the 2-0 victory against Nigeria.

Not even a dramatic late spot-kick failure in the last 16 against Denmark could derail Modric's superb tournament, the Real Madrid man a strong contender for the Golden Ball at Russia 2018.

Dier could be tasked with stopping the pair should Jordan Henderson fail to recover from a hamstring injury, and he knows he will have to be at his very best if called upon.

Speaking at a news conference, Dier said: "[They are] two fantastic players, world-class players in their position.

"They have been playing at an extremely high level for their clubs.

"Rakitic I haven't played against but I played against Modric twice this year in the Champions League and everyone knows what he did in the Premier League.

"He is a fantastic player who can create magical moments and I think he has been one of the outstanding performers so far in this World Cup.

"They are two great players, everyone knows that. But hopefully we can do our jobs on Wednesday as a team and individuals and contain them."