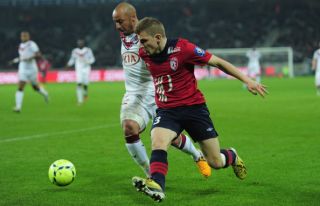 The 19-year-old's move from Lille to PSG was confirmed  on Wednesday, as he signed a five-year deal at the Parc des Princes on the same day PSG confirmed the capture of Edinson Cavani from Napoli for a reported fee of £55million.

And after joining at the same time as the Uruguayan star, Digne revealed he hopes to learn plenty from the club's top-class players.

"There are some really big stars in the team and I can't wait to play alongside the likes of Thiago Silva, Zlatan Ibrahimovic, Blaise Matuidi, Edinson Cavani," he told the club's official website.

"You progress faster when you're rubbing shoulders with great players."

However, the defender is not content with merely gaining an education in the French capital and has designs on securing a first-team spot to assist in the defence of their league crown.

"When you sign for the French champions, you have to defend your crown. That will be one of the objectives. We will also try and go as far as possible in the Champions League," Digne added.

"On a personal level, I will try and get as much playing time as possible. We will see how things go."

The left-back scored two goals in 33 appearances for Lille in 2012-13 and could make his PSG debut in their next pre-season friendly against Hammarby on July 23.