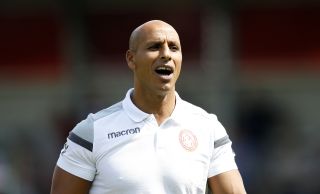 Oldham are looking for a new manager again after Dino Maamria left the club.

“Dino Maamria has today departed the club from his role as a head coach of Oldham Athletic, together with his team,” a club statement said late on Friday night.

“We would like to place our appreciation on record to Dino for his hard work and dedication.

“We also wish Dino all the best for his future endeavours.”

Oldham were 19th in Sky Bet League Two when the season was halted in March because of the coronavirus pandemic.