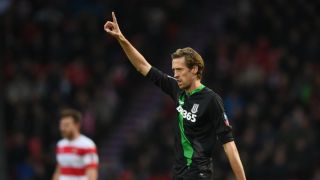 Goals from Peter Crouch and Jon Walters helped Stoke City into the fourth round of the FA Cup on Saturday as Mark Hughes' men ran out 2-1 winners against Doncaster Rovers.

Hughes made nine changes from Stoke's League Cup defeat to Liverpool on Wednesday and Crouch and Walters made the most of their opportunities to score either side of Nathan Tyson's equaliser for the League One side.

Crouch - making just his fourth start of the season at the Keepmoat Stadium - opened the scoring early on with a smart finish from close range only for journeyman striker Tyson to level before the half-hour.

Darren Ferguson - a former Manchester United team-mate of Hughes - saw his side gain confidence and go close through Conor Grant after the break.

The hosts were given let-offs too by some wasteful Stoke finishing but Walters' impressive long-range strike proved the difference in denying Ferguson's men a replay against the 2011 runners-up.

Debutant goalkeeper Jakob Haugaard was among the Stoke changes and was tested early on when Cedric Evina let fly from distance.

However, the Premier League visitors steadied themselves and led after 15 minutes courtesy of Crouch's second goal of the season.

Joselu evaded the attentions of Aaron Taylor-Sinclair and crossed for Crouch who cleverly turned the ball past Thorsten Stuckmann amid suspicions of offside.

Crouch unsuccessfully tried his luck from distance soon after, prior to Tyson's equaliser.

Luke McCullough burst through the middle and squared for Tyson who saw his first effort well saved by Haugaard before following up on the rebound to level.

Tempers flared prior to the half-hour mark as Philipp Wollscheid went into referee Keith Stroud's book for a shove on Tyson while Mame Biram Diouf wasted a golden chance to restore Stoke's lead before half-time.

In acres of space, Diouf failed to take on the shot and was eventually crowded out, although team-mate Charlie Adam did not need a second invitation to shoot after the break when his attempt from just inside Doncaster's half flew off target.

Everton loanee Grant shot just wide with a sidefooted effort from the edge of the area before Rovers had penalty shouts turned down when Craig Alcock went down under pressure from his marker.

Crouch's strike was blocked and, when Rovers defenders stood off Walters, the Republic of Ireland man produced an impressive effort from distance.

Andy Butler flicked Richard Chaplow's delivery onto Haugaard's crossbar and sent another header over from close range while Tyson too turned a glorious chance over the bar as Stoke were given a number of late scares en route to the fourth round.