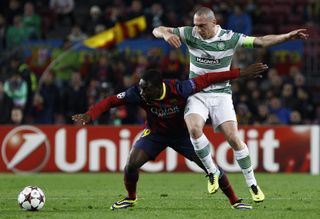 The 18-year-old made his La Liga debut as a late substitute in the 1-1 draw at Levante on January 19, and has also appeared in the UEFA Champions League and Copa del Rey for the Catalan giants.

The Cameroonian has had a buyout clause of €12 million written into his deal, and has recently been linked with a loan move to Premier League outfit Aston Villa.

And Dongou was delighted to extend his deal with the Spanish champions.

He told the club's official website: "It's a very important day in my career.

"I'm very happy. The two most important days were the first day I arrived (at the club) and the day I made my debut at Camp Nou.

"I am very excited to continue working and improving."

The 18-year-old has made 14 appearances for Barcelona B this term.

"I am delighted to renew for the best team in the world. I am very happy," he commented.