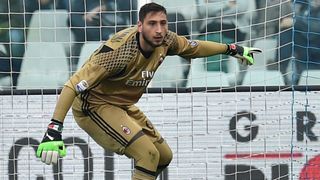 AC Milan goalkeeper Gianluigi Donnarumma is the kind of talent that only emerges once every 20 years, according to former club captain Paolo Maldini.

Donnarumma established himself as the first-choice keeper at San Siro at the age of 16 last season and has gone on to cement his place as one of the rising stars of European football.

Now 18, he has been linked with clubs including Manchester United and Manchester City, although the successful takeover of Milan by a Chinese consortium has led to reports that he will be offered a significant new contract to ward off interest.

And Maldini, a winner of seven Serie A titles and five European Cups in a stellar Milan career, says Donnarumma has been tipped for greatness since the age of 12.

"Somebody like Donnarumma is born once every 20 years," he told RMC. "People have been talking about this kid since he was 12 years old. He is pure talent."

Maldini confirmed this month that he rejected the chance to return to Milan in a directorial capacity due to doubts about the new ownership.

The 48-year-old has also revealed that he has had several opportunities to take up a role with Paris Saint-Germain, too, only to turn them down.

"I don't know why I never returned to Milan," he said. "I was close to coming back, both with [former president] Silvio Berlusconi and the new owners.

"I spoke to the new owners but I had too many doubts about the project and the role that was being proposed to me."

He continued: "I spoke to [PSG] president Nasser [Al-Khelaifi] several times. I also went to see a few games but we never came to a true proposal.

"I am ready to listen to any club, as long as it's not another Italian one – I can't do that after my history with Milan."

"Marco Verratti is a player I would always like with me," he added. "He reminds me of Andrea Pirlo: he plays short, long, he might not be strong physically but he doesn't struggle under pressure and is always ready to take risks with the ball. I think he's wonderful."