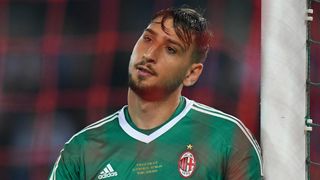 Gianluigi Donnarumma wants to put high-profile mistakes in the Coppa Italia final behind him as AC Milan prepare for the end of the Serie A season.

The 19-year-old was at fault for two goals as Juventus destroyed Milan 4-0 in Wednesday's final at Rome's Stadio Olimpico, all the Bianconeri's strikes coming in a 20-minute period.

Donnarumma's side head to Atalanta on Sunday in a pivotal game for their hopes of securing European qualification, the Rossoneri sitting a point and a place above Gian Piero Gasperini's men.

And the teenager says it is crucial Milan put a crushing Coppa Italia final behind them as they aim to finish the campaign on a high.

"We really wanted to win this game and we are sorry because we didn't manage it.

"But it's time to look ahead, we have two important games where we have to do really well. Let's move on.

"This is what being a goalkeeper means. Mistakes can happen but I want to move on.

"The disappointment is normal but it's time to move on because we are playing two very important games. We go to Bergamo ready and focused. I really want to do well and to show my qualities.

"I think we are all pumped. I saw the boys in the dressing room this morning [Friday] and you could feel the positive energy. We are absolutely ready."