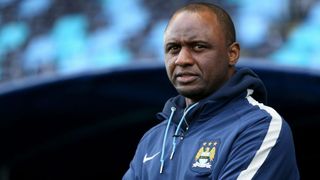 Outgoing Manchester City elite development squad chief Patrick Vieira has warned the club's fans not to expect a flurry of first-team regulars to emerge from the academy in the coming seasons.

Vieira, who is leaving for the MLS to take over at New York City, has been involved with the development system at the Etihad Stadium for five years, during which time the club has invested significantly in its future talent.

However, the Frenchman believes the structure of youth football in England does little to help the progression of youngsters and, as a result, he has warned supporters and administrators that unless Under-21s football is revamped there will only be a limited number of graduates into each club's first team.

"We have really talented players, but at 18, 19 they need first-team football. They need to play men. The way it is now doesn't work," he told The Times.

"Last year we played, say, against Spurs at their training ground in front of 20 people. How is that for the first team? It's not life or death for results.

"The gap between Under-21 and Championship now is massive. It is not realistic in the Under-21s.

"Everything at City is working the right way, but to judge success we have to be realistic. It might be one, two players over the next five years."

Vieira strongly advocated the introduction of B teams within the Football League, saying: "I strongly believe in this.

"The Under-21 should be Under-18 and then have a B team for the older group. Ideally in the Championship, but even League One would be a massive step forward."