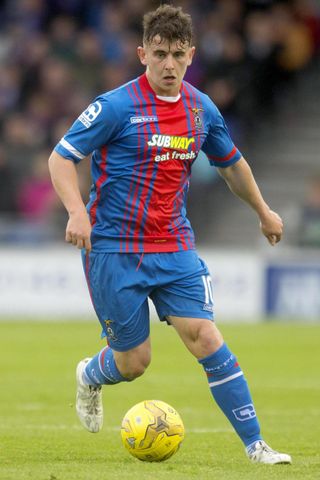 The 27-year-old Irishman has notched in every round so far this season; in the 6-1 replay win against Edinburgh City, the 4-0 victory over East Kilbride and in the 2-2 draw against Highland rivals Ross County before John Robertson’s side won on penalties in the replay.

His stoppage-time winner against fellow Championship side Dundee United at Tannadice in the quarter-final last month started a four-game goal streak which took his tally to the season so far to 11.

Doran won the cup with Caley Thistle in 2015 when they were a Ladbrokes Premiership outfit and he is keen to help them through to another final, which would be against either Aberdeen or Celtic, when they travel to Hampden Park for the semi-final against the Tynecastle side this weekend.

“The Scottish Cup has been good for me this year,” he told Press Association Sport.

“I think I have scored in every round so I want to keep that going on Saturday.

“My form is good at the minute and I want to keep that going, I want to have a good performance on Saturday and hopefully celebrate after the game.

“The last couple of months I have been making a lot more runs and the ball has been falling for me, like it did against Dundee United.

“I will keep trying to do that and hopefully I can get a goal at the weekend.

“I scored four or five games in a row recently and I haven’t done that in a long while.

“I feel fitter and sharper at the moment, it is all going well. We deserve to be here.

“We know Hearts are in a better division than us but we are playing some good football at the moment and we are confident going into this game.”

Inverness beat Celtic 3-2 in the 2015 semi-final with Dave Raven scoring a dramatic last-gasp winner in extra-time.

Doran believes that Hoops fans are still sore from the Josh Meekings hand ball which was missed by the officials, seconds before the interval and with the Hoops leading 1-0.

He said: “The pendulum swung in our favour and I think the Celtic fans are still unhappy with that so they will probably be looking to get us in the final and get a bit of payback.

“It was a great day and to win the final a few weeks later was a big achievement for the club.

“Even getting to the semi-final this season, with the position we are in, is a huge achievement and I think all the players can be proud of themselves.

“We are just concentrating on our own game and if we play the way we can do then I am sure we can give Hearts a good game.”