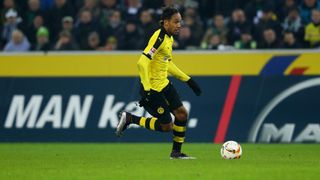 Borussia Dortmund CEO Hans-Joachim Watzke has made it clear that not even an offer in the region of €100million would suffice to lure Pierre-Emerick Aubameyang away from the club.

The Gabon international has been in stunning form this campaign and has been linked with clubs such as Arsenal and Paris Saint-Germain in recent months, although Aubameyang himself has routinely stressed that he has no intention of leaving Dortmund any time soon.

Former Germany international Lothar Matthaus stated at the weekend that a Premier League club could pay in excess of €100m for the 26-year-old, but Dortmund insist not even an offer in that region would tempt them to cash in on the prolific striker.

"Matthaus appears to be in the know on this one...," Watzke told Bild.

"But in all serious, even if such an offer would come in, that would be irrelevant for us. We are simply not selling Auba."

Aubameyang enjoyed a successful spell in Ligue 1 with Saint-Etienne before joining Dortmund in 2013 and PSG are believed to be keen to lure him back to France.

Nevertheless, the striker has told the reigning Ligue 1 champions that he is not interested in a move to the Parc des Princes.

"A move to PSG might have been an option last year, but not right now. I have no intention of returning to France," Aubameyang told Canal+.

Aubameyang, who has a contract with BVB until June 2020, has netted 27 goals in 28 appearances in all competitions this campaign.