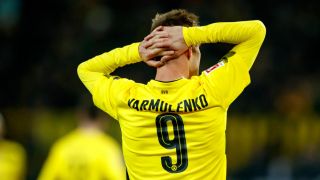 Andriy Yarmolenko will be out of action for "several weeks", Borussia Dortmund have confirmed.

Yarmolenko's Achilles injury is a further blow for the Bundesliga club, who are underachieving this season and sit sixth in the table after a 2-2 home draw with Freiburg on Saturday.

Dortmund are already without Maximilian Philipp due to a knee injury and captain Marcel Schmelzer because of a calf problem, while winger Marco Reus is building his fitness after seven months out.

Coach Peter Stoger could also be set to lose striker Pierre-Emerick Aubameyang, with the Gabon international reportedly close to joining Arsenal ahead of Wednesday's transfer deadline.

Yarmolenko was signed in August as a replacement for Ousmane Dembele after the French star's club-record €105million sale to Barcelona.

The Ukraine international has made 16 appearances in the Bundesliga after arriving from Dynamo Kiev in a deal worth a reported €25m, scoring three league goals.