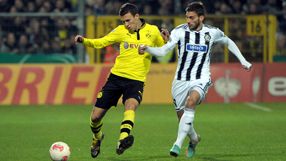 Defender Mats Hummels fired the ball in from a tight angle midway through the first half before left-back Marcel Schmelzer added another goal 10 minutes later.

Germany international Mario Gotze was also on target with a fine chip over keeper Jasmin Fejzic and Julian Schieber made it 4-0 in the 79th minute.

Aalen cut the deficit five minutes from time with a well-struck free-kick from Michael Klauss.

"It was fun to watch," Dortmund coach Jurgen Klopp told reporters after another dominant performance from his team who went top of their Champions League group with victory over Real Madrid last week.

"We have a good team and deserved to go through."

Romania international Ciprian Marica's bicycle-kick midway through the second half doubled the lead before Dutchman Klaas-Jan Huntelaar slotted in from 10 metres.

Bayern Munich take on second tier Kaiserslautern on Wednesday looking to bounce back quickly from their first league defeat of the season last week.