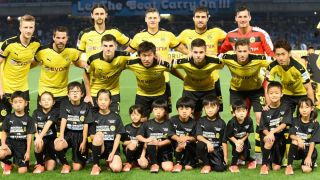 Thomas Tuchel's first three friendly games in charge of the Bundesliga side have now produced 17 goals, a statistic that bodes well ahead of the new campaign.

Dortmund's latest display picked up where they left off against Kawasaki Frontale on Tuesday, with Ilkay Gundogan opening the scoring after 22 minutes.

Gundogan has been in fine form in the opening games of the Tuchel era and he maintained his record of netting in every game with a neat finish.

Once the deadlock had been broken, Dortmund were clinical in front of goal as Pierre-Emerick Aubameyang and Kevin Kampl made it 3-0 in the space of 10 minutes.

Gary Robbat pulled one back for the Malaysian side before the break, but his strike was as good as it got for the hosts as Dortmund turned the screw after the break.