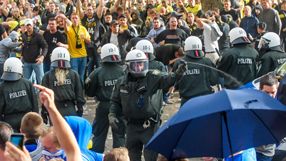 Dortmund fans threw lighters and other objects onto the pitch in the league game against regional rivals Schalke 04 in October while Schalke goalkeeper Lars Unnerstall was hit in the back by a coin.

Fans also interrupted Dortmund's game against VfL Wolfsburg in December after throwing paper rolls onto the goal of the visiting team and forcing the referee to briefly stop play.

The Bundesliga resumes on Friday after a four-week winter break with Dortmund in third place, 12 points behind leaders Bayern Munich.