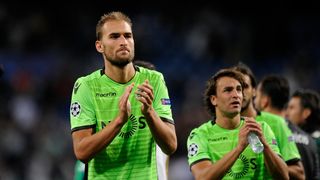 Sporting CP attacker Bas Dost netted a hat-trick in his side's 4-0 win over Boavista on Saturday to go level with Barcelona star Lionel Messi in the race for the European Golden Shoe on 54 points.

The Netherlands international has been in sublime form for the Lisbon giants since joining them from Wolfsburg at the start of the 2016-17 campaign and recently netted four times in the 4-1 win over Tondela.

He was once more unstoppable for Sporting at the weekend and added three more goals to his tally to make it 27 goals from 25 league games this term.

Messi, meanwhile, remained stuck on 27 goals as he failed to find the net in Barcelona's 2-0 shock defeat at the hands of Malaga at La Rosaleda.

Bayern Munich striker Robert Lewandowski scored twice in his side's 4-1 win over Borussia Dortmund to take his tally to 26 Bundesliga strikes and now sits third in the standings on 52 points.