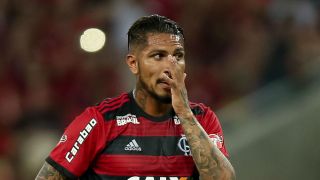 Peru captain Paolo Guerrero will miss the 2018 World Cup after his ban for a positive doping test was extended.

The Court of Arbitration for Sport (CAS) upheld an appeal from the World Anti-Doping Agency (WADA) to extend Guerrero's suspension to 14 months.

Guerrero is Peru's record goalscorer and was named in their preliminary Russia 2018 squad over the weekend, but his joy at being selected to represent his country at their first World Cup since 1982 proved short-lived.

The CAS verdict was announced shortly after the Peruvian Football Federation (FPF) tweeted pictures of their intended skipper taking part in a World Cup photoshoot and being measured for a suit.

FIFA reduced the ban to six months on appeal and Guerrero returned to action for Brazilian side Flamengo earlier this month, scoring in Sunday's 3-2 defeat at Chapecoense.

His lawyers argued Guerrero accidently consumed the stimulant by drinking contaminated tea and the player has protested innocence throughout the episode.

But WADA lodged an appeal – alongside another from Guerrero seeking to quash his sanction altogether – requesting the FIFA decision was set aside and a ban of one to two years implemented.

A statement issued by CAS read: "The CAS Panel confirmed the existence of an ADRV [anti-doping rule violation] committed by Mr Guerrero, but also accepted that he did not attempt to enhance his performance by ingesting the prohibited substance.

"However, the panel considered that the player did bear some fault or negligence, even if it was not significant, and that he could have taken some measures to prevent him from committing the ADRV.

"Considering that, in case of no significant fault or negligence, the sanction should, in accordance with the applicable FIFA rules, be in the range of one to two years of suspension, the CAS Panel considered that the appropriate sanction would be 14 months in light of the Mr Guerrero's degree of fault."

Peru overcame New Zealand in a play-off to seal their place in Russia and have been drawn in Group C alongside France, Denmark and Australia.