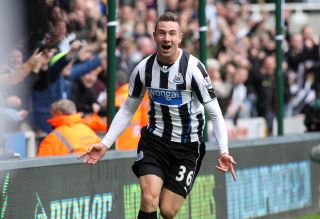 Dummett, 22, has broken into the Newcastle first team this season, making six appearances in all competitions.

The Wales Under-21 international scored his first goal for the club as Newcastle secured a 2-2 draw with Liverpool earlier in the month.

The full-back suffered a hamstring injury in the 2-0 League Cup defeat against Manchester City on Wednesday, and is set to miss out on Saturday's Premier League clash with Chelsea.

Pardew has been impressed with Dummett - whose contract expires at the end of the season - and is keen for him agree to a new deal.

"We have a deal in place for Paul," he said.

"That's something that has been talked about since the start of the season.

"Whether that gets resolved, I don't know.

"Unfortunately, he's got an injury which will rule him out of Saturday. But he's on a crest of a wave, and we love him."

Dummett's absence leaves Newcastle short of options in defence after Massadio Haidara also picked up a hamstring problem against City.

Captain Fabricio Coloccini and Steven Taylor are both still struggling with injuries, but Pardew is confident Newcastle's backline can cope with the threat posed by Chelsea.

"We are pretty stretched for Chelsea," he added.

"But we have four senior players that are playing well at the moment in our back four.