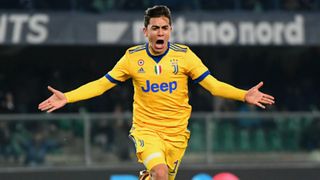 Juventus forward Paulo Dybala is among the world's best, according to Tottenham manager Mauricio Pochettino.

Pochettino's in-form Tottenham make the trip to Turin for Tuesday's Champions League last-16 clash against Serie A holders Juventus, with Dybala battling to be fit.

Dybala, 24, missed Friday's win over Fiorentina as the Argentina international recovers from a hamstring problem suffered last month, and Pochettino is hopeful of coming up against his countryman.

"I think Dybala will recover and I hope he does, because I think it's always nice to play against the best in the world," Pochettino told Rai Sport.

"I put Dybala in that category, because he is a special talent and seeing him on the pitch is wonderful, even if he might cause your team a few problems."

Dybala has scored 17 goals in all competitions this season, though he is yet to net in the Champions League.