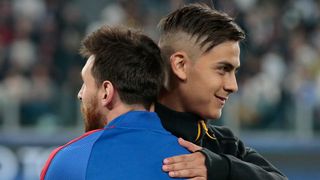 Paulo Dybala has refused to rule out joining Lionel Messi at Barcelona but insists he is happy at Juventus.

The Argentina international was linked with a move to Camp Nou during the transfer window following Neymar's world-record transfer to Paris Saint-Germain.

Real Madrid have also been credited with an interest in the 23-year-old, who has scored seven goals in four appearances in a blistering start to the season.

When asked if he could become Messi's team-mate in future, Dybala told a news conference: "He's already my team-mate for Argentina but I'm really good at Juventus, although I don't know what's going to happen in the future. I'm very happy to wear an important shirt like the number 10.

"Nobody said anything to me [about a Barca bid]. The club never came to me to say there was an offer on the table.

"The only thing the club said to me is that they want me to be part of this project for a long time, and I'm happy about that. As long as the club and the president [Andrea Agnelli] want me at Juve, that's where I'll be."

Dybala has been tipped by head coach Massimiliano Allegri as the player most likely to reach the level of Messi and Cristiano Ronaldo in the coming years.

The forward is flattered by the comparisons and is determined to reach those heights.

Juventus prepare to face Barcelona again in the ...Who will come out on top this time?  September 11, 2017

"What the boss said is nice but they will still be playing for many years," he said. "I will try to get to that level as soon as possible.

"I just think about working hard and improving all the time. I have great team-mates who help me a lot."

The Serie A champions, who lost 4-1 to Madrid in the final in Cardiff, begin this term's group stage with a visit to Camp Nou on Tuesday.

Dybala thinks the loss of Neymar could be damaging to Barca, despite them having signed Ousmane Dembele from Borussia Dortmund, but he believes it will be tough to get a positive result.

"It won't be easy to repeat what we did last year at a stadium like this," he said. "We know we'll have our opportunities and we have to be careful to exploit them well.

"They've lost a lot but they're a team who must be respected. They were very good in replacing Neymar."