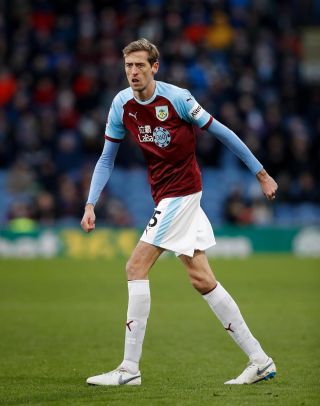 Sean Dyche must weigh up whether to offer Peter Crouch a contract extension after admitting the striker’s season could be over.

Crouch has made five substitute appearances for Burnley since joining from Stoke in January but an untimely bout of appendicitis means he may not appear again before his short-term deal expires.

The 38-year-old is yet to score for the Clarets but Dyche has been impressed with his contribution on and off the pitch.

The Burnley boss said: “He was getting his teeth really into it and I thought he was coming on and being very effective in games. It’s a real blow for him. But we’ll worry about all the rest of it as time goes by.

“He’s certainly done enough to be in our thinking of what he can do. The biggest thing for me is the desire, the edge that players play with, and he’s certainly shown that.

“You can see he’s got the competitive edge it takes to stay at the top level. I think he’ll be pleased with his fleeting moments and how he’s been around the group, because we take value in that as well.”

Burnley face Cardiff on Saturday in a match that looked like it would be crucial to both sides’ survival hopes before back-to-back victories over Wolves and Bournemouth pulled the Clarets away from danger.

A third successive win would move them 11 points clear of Cardiff, almost certainly securing another season in the top flight.

Defender Matt Lowton said: “Back-to-back wins is key at any time of the season but for us to do it now and put a few points between us and the bottom three is massive.

“The work we’ve done has definitely eased the pressure going into the game but it’s another big game for us to get points on the board and, if we win and results go our way, we can start moving up towards mid-table.”

Lowton has been first-choice right-back for most of his four years at Burnley but had started only one of the previous 20 games prior to last weekend’s trip to Bournemouth, with Phil Bardsley preferred.

But a freak injury to Bardsley, who sustained a deep cut to his leg on a head tennis table, gave Lowton a way back in and he is set to keep his place after impressing at the Vitality Stadium.

“It felt good,” said the 29-year-old. “It’s been a while. Everybody wants to play. Bardo’s come in and done great so nothing to complain about. I just kept working hard and waiting for my chance to come again and hopefully I can stay in.

“It is tough, definitely. You work hard all week and you just want to feel that buzz. But it’s part and parcel of the game. It’s how you acquit yourself when you’re not playing just as much as when you are to make sure when the chance comes you’re ready.”