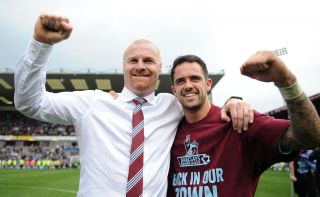 The former Watford boss watched on as first-half goals from Ashley Barnes and Michael Kightly secured a 2-0 win over Wigan Athletic at Turf Moor, sealing Burnley's promotion back to the top flight after a four-year absence.

Tipped by many to struggle this season, Dyche's men have instead demonstrated admirable consistency, losing just five Championship fixtures.

"I was promoted four times as a player and I know what it feels like and what it takes as a player but doing it as a manager is an incredible feeling," Dyche told Sky Sports.

"It feels marvellous and feels like the destination at the end of a long journey: an impressive journey from a group of people who are totally motivated and committed to stand the test of what a season is.

"I think what we have done is historic. The challenges of the Championship are getting harder and harder because clubs that get relegated are getting richer.

"I don't think those markers will be hit again. I think it is a marker in history."