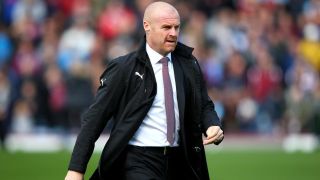 Burnley manager Sean Dyche hit out at Laurent Depoitre after the Huddersfield Town forward was booked for diving in their 1-1 draw.

Sam Vokes' first-half goal was cancelled out by Christopher Schindler at Turf Moor on Saturday, leaving Huddersfield winless and Burnley five points clear of the relegation zone in the Premier League.

But Dyche was unhappy with Depoitre, who was shown a yellow card for diving just before the hour-mark.

"It won't make a difference by showing a yellow card. He could do it again next week," he said.

"That's embarrassing, absolutely so. Anyone in pro sport at all – I just can't work it out, we're not talking gamesmanship or cleverness or someone clipping you and then they go down.

"We're talking blatant dives and today was cringeworthy, but no-one wants to do something about it. Maybe fans should lobby. Maybe they should say we have had enough now, some brilliant things have come through in our game, but that's not one of them."

"It was a very nasty challenge, nothing I like to see in football matches, even if I don't like to say someone has done it on purpose," he said.

"This is too dangerous, it's something the striker has to control himself because it could be much more serious than it is.

"[Schindler's] face doesn't look nice and the elbows are nothing I like to see in football."