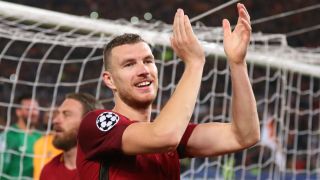 Roma forward Edin Dzeko has reiterated his commitment to the club following months of rumours around his future.

The 32-year-old Bosnia-Herzegovina international has spent three fruitful seasons in the Italian capital, scoring 73 goals in 139 appearances since his move from Manchester City.

After strong rumours of a return to the Premier League during the January transfer window Dzeko chose to stay, with the Giallorossi coming third in Serie A and reaching the Champions League semi-finals.

''This was part of the reason I stayed in January, when what happened, happened. But I have a wife, I have kids, and at the moment all of them are very happy here.

"Even if we did not win anything last season, I think we had a great campaign – especially in the Champions League – and hopefully we can do something even better this season."

Roma have had a summer of upheaval so far, losing stalwart Radja Nainggolan to Inter Milan, while goalkeeper Alisson is expected to leave for Liverpool for a world record fee.

The club has also spent over €50million on Javier Pastore from Paris Saint-Germain, Justin Kluivert from Ajax, Davide Santon from Inter and Ante Coric from Dinamo Zagreb.