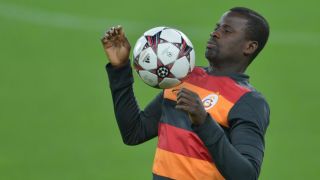 A move to Ligue 1 interests free agent Emmanuel Eboue as he looks to find a new club.

The former Arsenal defender spent four years at Galatasaray before his contract came to an end at the close of last season, having previously been left out of Cesare Prandelli's squad and sent to train with the club's Under-21 side.

The 32-year-old has discussed the prospect of a return to Arsenal this week, although such a move seems unlikely, and Eboue also feels a spell in France's top flight could be a potential route back into the game.

Asked whether Ligue 1 appealed, Eboue told France Football: "Yes a lot. I would really like to come here and show my talent to the French.

"It's an interesting league that is on television fairly regularly. I have plenty of Ivorian brothers who are there. That interests me a lot.

"The most important thing for me is to find a club and be happy on the field. I'm a free agent. I'm very hungry. I really want to prove to people that Emmanuel Eboue is not finished.

"Those who know me know I'm in shape. I have never let myself go, I continued to train with professionals.

"I am looking for a club. I want to play. Regardless of training and level, I want to bounce back this winter and regain trust. For the longest time, I made the mistake of staying in my shell and not expressing myself. But now I'm hungry.

"I really want to do my job and regain ground."