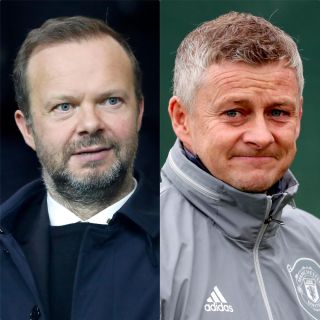 This has been another topsy-turvy season in the post-Sir Alex Ferguson era at Old Trafford, although the club remain in the hunt for Europa League and FA Cup glory as well as Champions League qualification.

United sit fifth in the Premier League but the eye-watering 38-point gap to table-topping rivals Liverpool underlines the work required if they are challenge for the top honours once more.

The big-money January arrival of Bruno Fernandes has increased optimism around the club and Woodward, who has been the subject of chants and saw his house attacked by some disgruntled fans last month, believes United are on the right track.

“We are pushing for a strong finish in the Premier League, the Europa League and the FA Cup as we enter the final third of the season,” he said.

“We have continued to make progress on our squad rebuild, with many changes in terms of players that we have brought in and players that have come through our academy.

“The foundation for delivering the long-term success that we are all working towards is in place as we implement our plan and our footballing vision with Ole.”

Woodward made his comments as United released their second-quarter 2020 fiscal results.

He used the subsequent conference call to restate the focus on bringing success back to the club as they progress towards their number one priority of “winning trophies with a team playing entertaining and attacking football”.

“This season is one of rebuild, with many changes to the squad – in terms of players who have left or gone out on loan, new players who we have brought into the club and academy graduates that we have brought through to the first team,” Woodward said.

“This process will continue as we implement our plan and our footballing vision under Ole and his coaching staff.

“Despite being linked to 111 players in January, our acquisition of just one of them, Bruno Fernandes, is an important step in that direction, demonstrating our commitment to adding experienced, world-class recruits to the exciting crop of academy graduates that are at the heart of this developing team.

“We will take the same planned, disciplined, approach this coming summer.”

Woodward added: “Our own long-term plan is underpinned by the enduring strength of our business, which provides us with the funds and the confidence to keep investing in our team and in our facilities.”

United reiterated on Tuesday that they remain on track to meet their revenue guidance for the year of between £560million and £580million, but second-quarter 2020 fiscal results show net debt is up 23.2 per cent to £391.3m.

The club say the increase of £73.6m over the year is “primarily due to an overall decrease in cash and cash equivalents” and that “the gross USD debt principal remains unchanged”.

United recorded revenues of £168.4m in the second quarter – down 19.3 per cent on the same period the previous year – and an operating profit of £36.5m, which is down 17 per cent due in no small part to the lack of Champions League football.

Big-name signings will be required if they are to regularly compete at European’s top table once more but Woodward believes the academy continues to have a key role.

“In addition to the first-team signings, somewhat under the radar, we’ve also made a number of exciting youth acquisitions in the past year, reflecting our commitment to bringing the best talent into our academy,” he said.

“So far this year our academy graduates have contributed over a third of first-team playing minutes this season and over half of our goals, emphasising our academy’s status as one of the most productive in elite-level European football.

“This is an important competitive advantage for us and represents an excellent return on the fourfold increase in investment that we have made in the academy over recent years.”

Before the conference call, United announced a new deal for highly rated defender Ethan Laird until 2023, with the option of a further year, as well as an extension for development team goalkeeper Paul Woolston until 2021.