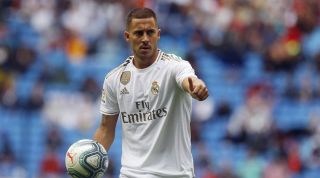 Eden Hazard says there is more pressure at Real Madrid than at Chelsea because there "aren't so many fans" in England.

The Belgium international ended a seven-year stay at Stamford Bridge to join los Blancos in an £88.5m deal this summer.

Zinedine Zidane's side have endured a tricky start to the season, winning two and drawing two of their opening four La Liga matches.

And Hazard says a failure to emerge victorious in any given game is a bigger deal at the Bernabeu.

"At Chelsea when we lost, we were disappointed, like the fans, but I never felt it was a disaster. It's different in Spain," he told UEFA.

"I think that here the fans are really fans, football is everything to them and they need players to give everything. In England there aren't so many fans.

"Of course, people there like football and everyone – be that young people, adults or teenagers – are really interested in football, but they aren't so fanatical about their teams."

Madrid begin their Champions League campaign with a trip to PSG on Wednesday.