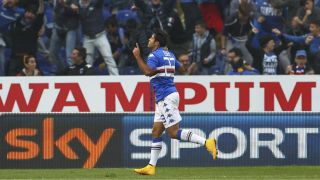 Sampdoria attacker Eder has admitted he feels flattered by rumours that Serie A leaders Inter are interested in signing him.

Roberto Mancini's side are believed to be keeping a close eye on the Brazil-born Italy international following his fine performances this campaign and he has acknowledged he would be open to a transfer.

Eder has netted 11 goals in 16 Serie A appearances so far this campaign and has a contract with Sampdoria until June 2020.

"It pleases me to be linked with Inter," Eder told Mediaset Premium.

"We are talking about a big club here.

"There is nothing concrete at the moment, but if the club tells me there are developments I will sit down with my agent and discuss it.

"Sampdoria have given me a lot and I will always do my best for the team.

"My agent is the one dealing with transfers."

Eder has eight Italy caps to his name, with two goals, including one in October's 3-1 win that sealed Italy's place at Euro 2016.