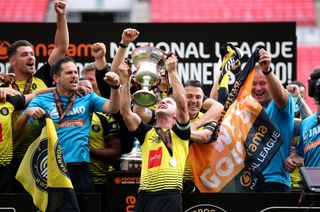 EFL newcomers Harrogate Town face a dream trip to Premier League West Brom in the second round of the Carabao Cup.

The reward for Saturday’s win over Tranmere on penalties is a visit to the Hawthorns to play the Baggies, themselves only recently promoted back to the top flight.

Fellow League Two side Salford also have a Premier League challenge having been drawn against Everton at Goodison Park.

🏆 | We will travel to The Hawthorns to take on Premier League @WBA in Round Two of the @Carabao_Cup— Harrogate Town AFC (@HarrogateTown) September 6, 2020

There is an all-Premier League tie between Burnley and Sheffield United, while League One Burton host top-flight opponents in Aston Villa.

In the South group Bournemouth, relegated from the Premier League, host to-flight Crystal Palace, with the winners given the unenviable task of going to Manchester City, winners for the last three seasons.

The third round was drawn immediately afterwards and threw up a number of potential prime ties.

Should Harrogate prevail over the Baggies then they would have a home game against Premier League Southampton or Championship club Brentford.

The incentive for League Two Bradford and League One Lincoln for winning their second round encounter is a home tie against Premier League champions Liverpool, while either Leyton Orient or Plymouth will get Jose Mourinho’s Tottenham.

A Championship side in either Luton or Reading will host Manchester United in round three, while the only all-Premier League third-round tie sees Leicester host Arsenal.