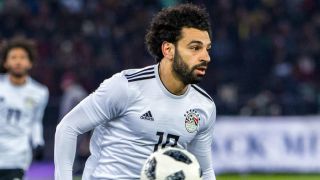 Mohamed Salah deserves to be considered among the world's best players, according to his Egypt coach Hector Cuper.

Salah opened the scoring in a 2-1 friendly loss to Portugal in Zurich on Friday, the latest strike of what has been a prolific season for the 25-year-old.

Signed by Liverpool from Roma in June, the forward has plundered 28 Premier League goals in 30 appearances, leading some observers to compare him to the likes of Lionel Messi and Cristiano Ronaldo, who netted both of Portugal's goals in injury time in Switzerland.

Speaking after the match at Stadion Letzigrund, former Valencia and Inter coach Cuper discussed the importance of his prized asset.

"I think that without a doubt Salah is one of our best players," he said.

"I always say that behind a great player [there] has to be a great team."

Egypt will appear at the World Cup for the first time since 1990 after finishing top of Group E in CAF qualifying, and Cuper expects his team to make the most of Salah's presence at the finals in Russia, where they will face Saudi Arabia, Uruguay and the hosts.

"I don't know if we are a great team but we cover what Salah gives us, we try to give as much security as we can as a team and until now we were able to achieve things," he said.

"We know that as we raise the bar we have to raise the level up.