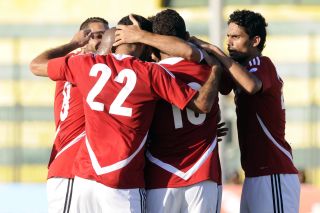 The Ghana Football Association earlier this month demanded the game to be moved to a neutral venue due to the unrest in Egypt.

FIFA gave the Egyptian Football Association (EFA) until October 28 to provide assurances that it would be safe to play the game in their country.

And the country's Ministry of Defence have given the green light for the match on November 19 to be played at the Air Defence Stadium.

EFA spokesman Azmy Megahed said on Tuesday: "The ministry of defence informed us in an official letter that the full capacity of Cairo's Air Defence stadium (30,000 supporters) will be allowed to attend the match."

Egypt will need all the support they can get for the second leg, as they trail 6-1 following the first leg in Kumasi last week.