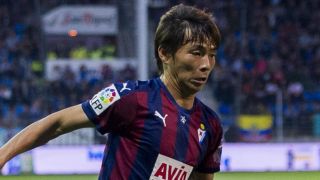 Eibar thrashed Granada 5-1 in La Liga on Monday to strengthen their Europa League qualification credentials and worsen the relegation worries of the Andalusian strugglers.

Basque side Eibar led 2-0 by half-time at their Ipurua home thanks to two goals in three minutes from Takashi Inui and Sergi Enrich, both set up by Keko.

Youssef El-Arabi gave Granada hope of mounting a comeback when he seized on a defensive mistake to make it 2-1 in the 65th minute.

But the visitors succeeded only in triggering a late onslaught as, just three minutes later, Enrich lashed home to complete his brace and restore Eibar's two-goal cushion.

Borja Baston then got in on the act with a double in the space of five minutes, Enrich turning provider for the second as the hosts ran out comfortable winners.

Eibar are now sixth, a point behind fifth-placed Celta Vigo and one point ahead of Sevilla. Granada meanwhile remain 17th, just one point clear of the relegation zone and only three points off the bottom.