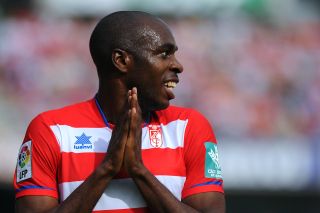 The Cameroon international was booked in the 88th minute of the clash at the Estadio Manuel Martinez Valero after kicking the ball into the crowd in protest over the abuse.

The Valencian side revealed their disgust at the behaviour in a club statement, and reaffirmed their commitment to stamping out abuse of all kinds.

It read: "Elche CF expresses its total condemnation of the incidents that occurred in the 89th minute of the match against Granada.

"The club wants to put on record its deepest revulsion towards racist chants that were made from a very small area of the crowd to the visiting player Nyom in that particular moment of the meeting.

"In fact, after this incident, we warned through the public address system of the stadium for the immediate stop of such conduct.

"The club reiterates its absolute commitment to the protocol of action against racism, xenophobia and intolerance in football and condemns behaviour and actions that involve failure to comply with this law."