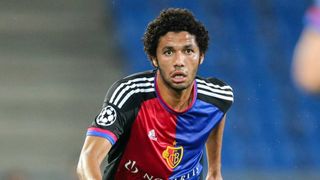 New Arsenal midfielder Mohamed Elneny has wasted little time in revealing ambitious goals as he aims to win an historic treble in his first campaign with the club.

The 23-year-old completed his move from Basel on Thursday and spoke of his delight at sealing the transfer along with the opportunity to play under Arsene Wenger.

Elneny is thinking big as he begins his Arsenal career, targeting glory in the Premier League, FA Cup and Champions League this season.

"I would like to tell [the fans] that, although you have not seen much of me, I promise I will contribute positively with the team," the Egypt international told Arsenal Player.

"I am hoping that we win the Premier League and cup this season, and the Champions League as well.

"It is an indescribable feeling [to sign], I am really glad of course. Arsenal is one of the world's greatest teams and I am very keen to participate positively with my new team, God willing, and to give my best for the team and for myself.

"Arsenal is one of those teams that everyone enjoys watching and of course I would love to play for such a great team.

"Mr Wenger is a highly respected manager and one of the world's best managers. It is my honour to be trained under his management.

"It is one the biggest clubs in the world, I know everything about it and its players."