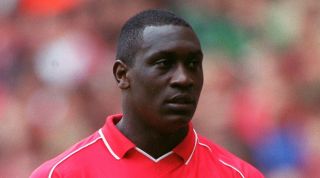 Former Liverpool striker Emile Heskey has revealed that he felt extremely homesick after moving to Anfield in 2000.

The Reds broke their transfer record to sign the centre-forward from Leicester for £11m.

Heskey was a highly-rated prospect at the time having recently made his first England start against Argentina, but he now admits that he initially struggled to adjust to life on Merseyside.

"It lasted six months,” the Leicester-born frontman told the Guardian. “I had to grow up very quickly because I had kids, I had a girlfriend. I literally laid on the floor and started crying.

"I was like ‘What have I done? I don’t know if I have done the right thing’. But the weirdest thing was I’d go to training and I would be all right.

“Then like a drop of a hat I found a barber, I found friends, a routine. Yes, it was a tough time but it was weird, I was silly and, looking back, you think: why didn’t you just go and sit with mates?”

The striker also won 62 caps for his country, playing in two World Cups but scoring only seven international goals.

However, Heskey believes his strike rate is not important as he brought plenty of other qualities to the table.

"I play for the team. It wasn’t anything that really bothered me,” Heskey said. “I know forwards will go out and if [the team] score five and they don’t, they are fuming. I don’t care. I still got to the top 1% or whatever of the game.

"Your son is eight. So if I tell you by the age of 24 he would’ve represented England youth all the way through, would have made his debut at 17 and gone to three cup finals in four years for his hometown team [Leicester], then been sold for a record to Liverpool – one of the biggest clubs in the world - then he’d go on to win the treble [FA Cup, League Cup, UEFA Cup] that first season, represent England at two World Cups, in the European Championship, and play in one of England’s most memorable games to date [a 5-1 victory over Germany in 2001], winning God knows, six or seven trophies by the age of 24, how would you feel?”

Heskey hung up his boots at the end of 2015/16 after Bolton were relegated to League One.