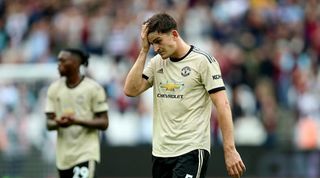 Former Arsenal midfielder Emmanuel Petit says he does not “recognise Manchester United any more” and has backed his former club to win at Old Trafford on Monday.

United and Arsenal will renew hostilities as both clubs seek the victory that will move them into the top five of the Premier League.

Ole Gunnar Solskjaer’s side have endured a particularly difficult start to the season, winning only two of their first six fixtures to sit 11th in the table.

United are already 13 points adrift of table-topping Liverpool and are highly unlikely to win their first title since Alex Ferguson’s retirement in 2013 this term.

And Petit, who regularly clashed with the Red Devils during his three-year spell at Arsenal between 1997 and 2000, cannot believe how far the club have fallen.

“Since Alex Ferguson left I don't recognise Man United any more. They should scare their opponents - they haven't done that for a long time,” he told Paddy Power.

“I'm very surprised about this, because they've been spending so much money. Yet the profile of the players is not what Man United expect - especially when it comes to the fans and former players.

“I remember back in the day when you had to play against United, you always knew you were going out to face the best footballers in the Premier League - and probably in Europe.

“Some of the players at the time were among the best in the world in their position - now I'm wondering: where are those United players with character, who enjoy responsibility? Who play with imagination, creativity, and who have a great mentality on top of that. I used to see that all the time at United.

“They've put a lot of money on the table. But how many of the current squad are among the world's best? They've spent so much money on average players, which has been the case for ages. It's not a question of money – it's a question of profile.”

Victory for Arsenal on Monday would move Unai Emery’s men level on points with third-placed Leicester.

The Gunners have not beaten United away from home in the Premier League since 2006, but Petit believes they have an excellent chance to do so on Monday.

“You just don't know what to expect from this fixture. Arsenal have been thrashed by Liverpool, though Man United aren't on that level. That said, you'd think Arsenal have a very good opportunity to win at Old Trafford.

“They need a win away from home, as they've been dropping points so easily on the road. this match is very important for them, and it's a good time to be playing Man United.

“There will be open spaces behind the United backline and with the speed of Arsenal's forwards, they'll get chances. But they need to show defensive resilience to allow for that to happen. Arsenal have a good chance to win.”