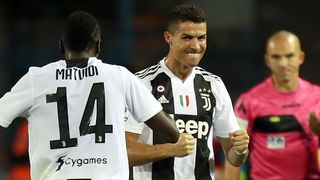 Cristiano Ronaldo fired Juventus seven points clear in Serie A with a match-winning brace in a hard-earned 2-1 victory at Empoli on Saturday.

The Portugal superstar erased a first-half deficit from the spot shortly after the interval before a thunderous swerving drive 20 minutes from time ensured there was no repeat of last weekend's frustrating home draw with Genoa.

Juve lost Giorgio Chiellini to injury in the warm-up and had looked set to leave the door open for Napoli to move back within a win of joint top spot when Francesco Caputo put the struggling hosts ahead in a tense first half.

But the champions' increasingly impressive talisman backed up his fine Champions League showing against Manchester United with a one-man rescue act that boosted his league tally to seven goals.

Juve asserted their dominance in possession after that chance only to be hit with a sucker punch on 28 minutes, Caputo capping off a quick break with a splendid curling finish beyond Wojciech Szczesny.

Empoli were emboldened and had penalty appeals turned down when Miha Zajc's shot struck Leonardo Bonucci's hand on the edge of the area.

The second half started in strikingly similar fashion to the first as midfielder Pjanic frustratingly picked out the apex of post and crossbar following Ivan Provedel's close-range denial of Alex Sandro.

This time, however, it was Juve who struck with the next sight of goal, Ronaldo tucking home from the spot after Ismael Bennacer bundled over stand-in skipper Paulo Dybala.

If that was an understated equaliser, his second was a fitting way to settle a tight contest with a swerving rocket from 25 yards whistling past Provedel and affording Massimiliano Allegri a hefty sigh of relief.

What does it mean? Ball back in Napoli's court

It will be fascinating to see how Carlo Ancelotti's second-placed Napoli respond to seeing a possible opening slip away in what is a tough home meeting with Roma on Sunday.

The Bianconeri failed to approach anywhere near the heights they reached in Manchester but, with Ronaldo scoring goals in the manner of his spectacular winner, no situation appears beyond retrieval.

So impressive in the Champions League on Tuesday, Rodrigo Bentancur came back to reality with an anonymous performance that will leave Allegri hoping for Emre Can and Sami Khedira to swiftly return to fitness.

Juve host Cagliari next Saturday before a Champions League rematch with United at Allianz Stadium, while Empoli will be focused solely on Friday's tough trip to Napoli.