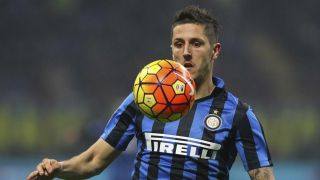 Stevan Jovetic has warned Inter not to focus on the Scudetto just yet as the Serie A leaders return to action against Empoli at the Stadio Carlo Castellani on Wednesday.

Despite signing off the first half of their campaign with defeat to Lazio, Roberto Mancini's side return from their mid-season training camp in Doha a point clear of Fiorentina and Napoli at the top of the table.

An impressive record of just 11 goals conceded in the opening 17 matches has bolstered hopes of a sustained title challenge from Inter, who have not been crowned champions since 2010.

"We are doing well and have good players but we can still improve more in the next games," he told www.sc.qa. "It is still too early to talk about the title but our target is to be in the top three and get back into the Champions League.

"Then in April or May we will see where we are and what else we can do.

"It is always important when you have the support of the manager and I will try my best on the pitch to say thank you to him."

Marco Giampaolo's Empoli have taken just one point from their last six league games against Inter, but signed off 2015 with a 3-2 win at Bologna thanks to a brace from in-form veteran Massimo Maccarone.

That win ensured Empoli a fourth straight success in Serie A for the first time, with Giampaolo's men comfortably in eighth following a 15th-placed finish last term.

This week Giampaolo paid tribute to his predecessor Maurizio Sarri and dismissed the prospect of eyeing a bigger club.

"Sarri has done a great job here, I tried to maintain some things that added value and then I tried to integrate new ways and improve self-esteem," explained the former Brescia coach.

"The club, for its part, has been able to build the team due to the excellent sales, but knowing you have players in the team ready to go.

"I always try to work following certain ideas and I never diverged from those. Sometimes it went well, others it didn't.

"I do not lose sleep [about coaching a big club], I think I have already a very good team that I enjoy, it gives me satisfaction, I'm not going to try something different."

- Empoli have failed to score in their last three games at home against Inter.

- Empoli have lost 12 points from leading situations since start of this Serie A campaign – more than any other side.

- Inter have a record of 11 wins and a draw in the 12 games in which they have taken the lead so far this term.

- Over the last three seasons, Inter have picked-up only one point on their opening game of the new year after the Christmas break.